Who’s in your ‘Famous Five’?

I think all of us are part of our very own ‘Famous Five’ (not to be confused with a Kill Bill-esque ‘Death list five’). We all have our close circle of friends we’d call on for an adventure. It’s probably a diverse group, each member with their own unique skills and wit. They’re the people you immediately turn to when something’s brewing on the horizon, whether it’s a camping odyssey or a crew to help you clean the garage. They’ve got your back.

In Enid Blyton’s series ‘The Famous Five’ a group of friends are given free license by their parents to roam the countryside, invariably bringing criminals to justice and finding lost treasure along the way. The eldest of the group is a strapping 12 years old, so clearly this is totally fine. They row to mystery islands, thwart major smuggling operations, go exploring in a gypsy caravan (with horses!), eat macaroons and make cocoa over campfires in caves. On the regular. No supervision. Totally fine.

To nine-year-old me, the Famous Five represented complete freedom. If you were raised on a steady diet of Blyton, you probably remember that feeling. First, the classic bedtime story ‘The Magic Faraway Tree’ read aloud one precious chapter at a time by a parent. If you were really lucky, you could squeeze two chapters out of them. Then you found ‘The Secret Seven’, but they really had nothing on the Famous Five. Seriously, I don’t remember any of their names. They did boring things like write in notebooks and sketch shoeprints (although this did inspire a long period of spurious note keeping. If you did anything peculiar in my neighbourhood when I was 10, I probably squirrelled it away in a tiny spiral bound notebook and treated you with suspicion for evermore). On the other end of the spectrum was the ‘Adventurous Four,’ in which a group of friends are allowed to go off sailing during wartime (well played, parents). Inevitably they are shipwrecked and have to face scary soldiers, escape submarines and be mega brave with crap-all supplies. They sleep on heather and ration hard biscuits, yet always seem to have enough cocoa to go around. Blyton had a heart.

Inevitably I bounced back to that happy intermediary, the Famous Five. It was just right. Not too mundane (Secret Seven, I’m looking at you) and not too hard-core (jeez, Adventurous Four, chill). Part of the lure was the old-timey British and Welsh setting. Every three seconds they seemed to stop at a farmhouse to be fed by some matronly farmwife, or for elaborate picnics with fresh lemonade. They keep matches in oilskin pouches when they’re swimming to islands in the dead of night. The ancient houses are so chock full of secret passageways it’s a wonder the things stay standing. And everywhere, there’s a mystery to be solved. I mean, wow. These kids sure kept busy.

It’s easy to brush off your favourite childhood stories as you get older. Sure, there’s not a smuggling ring involved every time you misplace your car keys. That boss you hate probably isn’t involved in anything illegal. But the readiness for adventure with your close friends – that’s something we should always treasure, no matter how old we get. Give your own famous five a call and plan your next adventure. Don’t forget the cocoa. 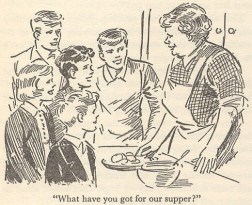 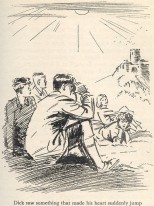 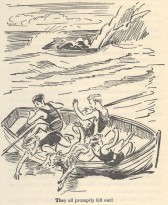