Summer so far has been an exhausting haze of uncertainty and fear, measured by the growth of the Currowan bushfire. The family farm in Milton and my mother’s cottage in Lake Tabourie have repeatedly come under threat. The entire 100-acre farm that my siblings and I grew up on is now a charred, burned landscape. The big bush sheds have been incinerated, the water tanks melted. The timber fencing and retaining walls were obliterated, leaving nothing but regular heaps of galvanized screws. Yet we’re some of the lucky ones; we still have a home.

On the 20th of December, embers landed in the back paddock of our farm, igniting spot fires that merged into a firefront that roared up the hill. My sister Kate and her partner Joel had to leave their recently built cabin, a lone sprinkler on the roof and tanks filled with dam water their only line of defence. My pregnant sister Sara and her family also had no choice but to leave the main house as the fire licked ever closer. I’d already evacuated some of the cultures and stock from my mushroom farm, but I knew my little laboratory could well be destroyed. That night, we were lucky – it was relatively quiet elsewhere on the firefront. Victorian firefighters battled the tremendous blaze and managed to save the house and sheds; and to then save it once more when the fire flared up again the next day in continuing catastrophic fire conditions. They left letters for us on the verandah, even feeding our cat, Shadow. She and Mindy the donkey, the only animals unable to be evacuated, were completely fine. John, a firefighter on the ground, messaged me later: “We had 2 tankers set on the property. Had a crew member on the deck, one on the ground, 2 on the right side, 3 on the shed side. It was a long battle. We were glad to have done the job we were sent there to do. Merry Christmas to you and your family from us here in the Victoria CFA.” 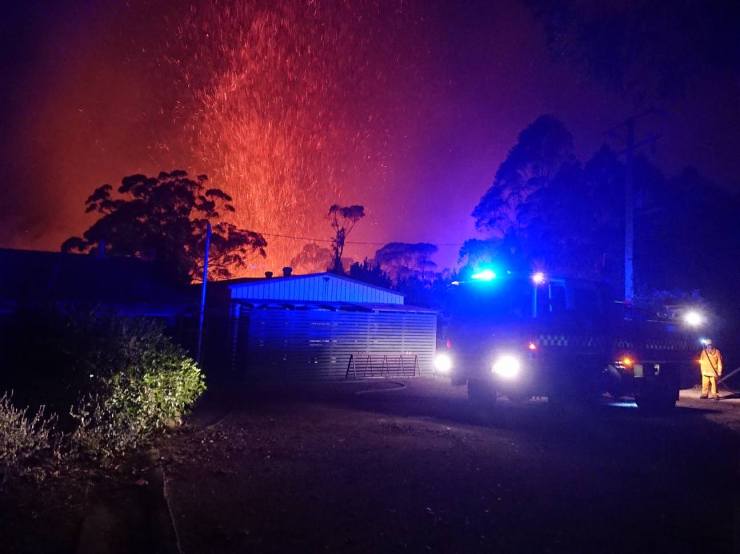 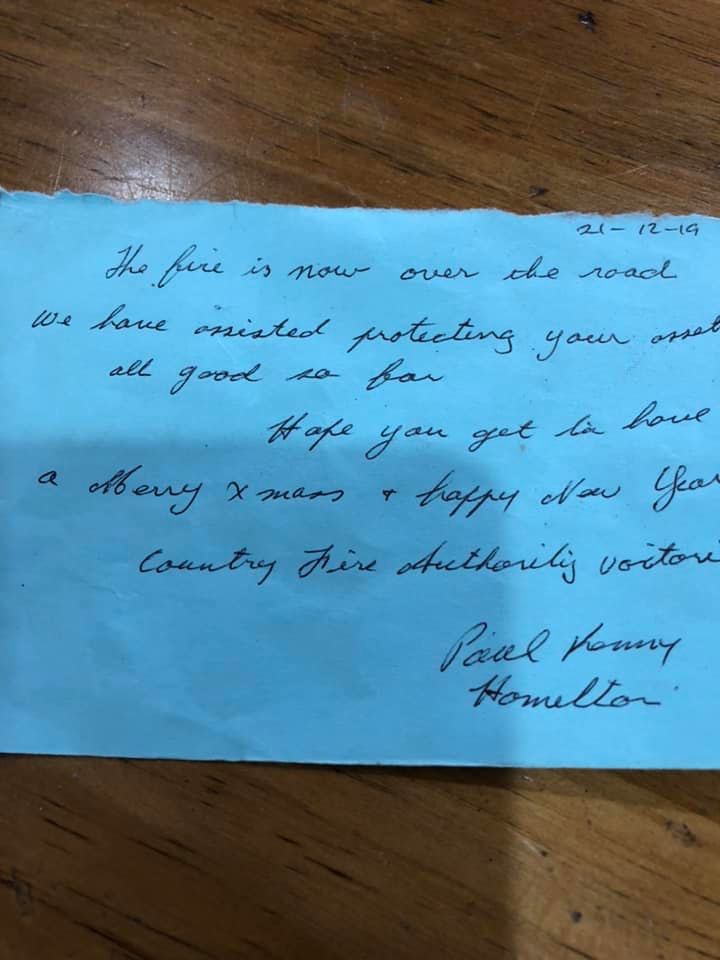 We did have a merry Christmas, albeit a somewhat subdued one. We were so thankful to be together and safe, tired yet hopeful that the worst had passed.

We were wrong. Early January brought more catastrophic conditions and our small coastal community was surrounded by fire. Thousands of tourists were trapped as they tried to escape what was designated as ‘the Shoalhaven Leave Zone’ by the RFS. The Princes Highway was closed in both directions for days, only opening intermittently for a few hours to escort some tourists to safety. We had no power, no petrol, and trucks couldn’t get through to restock the local supermarkets. Tourists queued in parked cars for more than twenty kilometres from Lake Tabourie to Milton, desperate to be there when the highway finally opened, climate refugees fleeing this disaster. As a result, no one could get into town; I worried about what would happen if they were still stuck when the fire inevitably came through.

I’ve never been prouder to be part of our local community. People opened their doors to the tourists stranded on the highway, providing food and water, access to toilets and showers. The local RFS stations provided up-to-date information in an incredibly timely manner. Energy companies restored power as soon as humanly possible, often working to clear wires and hoist poles in the still smouldering bush. Local charity group Treading Lightly stepped up in a big way, coordinating local relief efforts to get food to people stranded in cut-off towns by car and boat, and providing support for displaced native wildlife. A legion of volunteers ran the evacuation centre at the Ulladulla civic centre. The visiting circus lent them their generator when power was cut off, whilst their four lions brought smiles to otherwise tired and drawn faces, as they sunbaked languidly on their private trampoline beside the highway.

I live with my Mum at Lake Tabourie in a little cottage, and I’ve never been more grateful for our water tanks, gas stove, and vegetable garden. We ate fresh salad for dinner every night, supplemented with rice, beans, and other pantry staples. I’ve never appreciated each meal more in my entire life.

We listened to ABC radio in the car each day – our only connection to the world beyond the ring of fires hemming us in on all sides. It was through considered, and compassionate announcements from the ABC Radio hosts that we learned of the tragedy at Conjola, with 90 homes lost. We had no idea whether my sister Sara and her family, who had evacuated to Fisherman’s Paradise, were all right. The same firefront had hit Fisherman’s Paradise and there was no word on this small village for several long days. My three-year-old nephew Hunter sheltered with his too-big P2 mask in my sister Sara’s arms as the locals banded together to fight the fire with garden hoses. There were no fire trucks spare to help them. Thankfully, they managed to protect the tiny hamlet. The same luck didn’t extend to the adjacent Conjola Park.

On Saturday 4th January, my exhausted family heeded the warnings of the local RFS to seek shelter in a built-up area, heading into Ulladulla with food and packed bags. It was blisteringly hot – mid-thirties beside the harbour and mid-forties in town. By the afternoon, the bushfires had again surrounded Lake Tabourie and the highway was closed to Burrill Lake. A bit after 6pm, the southerly hit with sudden, swift force, turning the sky dark. Swarms of local corellas and gulls were shaken from the trees beside the harbour and cawed loudly as they tried to land safely amidst the gusts. My family took shelter down by Ulladulla harbour, not knowing whether the farm or even my Mum’s cottage would survive. We cooked sausages on a camp cooker and slept in our cars, beside our canine buddies, grateful that we’d thought to bring camping mattresses and sleeping bags. I woke up on Sunday morning covered in a fine layer of ash, deposited overnight through the tiny crack in the car windows.

We drove through a charred wasteland back to the farm, not knowing what we would find. The entire landscape was black, smouldering, seething. We put out embers and flare-ups, the ground so very hot under our feet, almost a living, breathing beast. The southerly had rained fire down on the national park and our surrounding neighbours. The bush sheds were incinerated; although somehow the house itself didn’t catch alight. The tanks and garbage bins had melted. The gardens were burnt to ash. A lone Japanese maple, still in its plastic nursery pot, stood alone, untouched on the gravel. We learned that on Saturday afternoon it was so dark and the smoke so thick that people fleeing couldn’t see our local roads. There were two crashed cars on Woodstock Rd right near our place, burnt-out shells with doors flung open. It makes me feel sick to my stomach imagining people disoriented and frightened, trying to escape the smoke and flames. It’s a miracle that nobody lost their life that day on Woodstock Road. 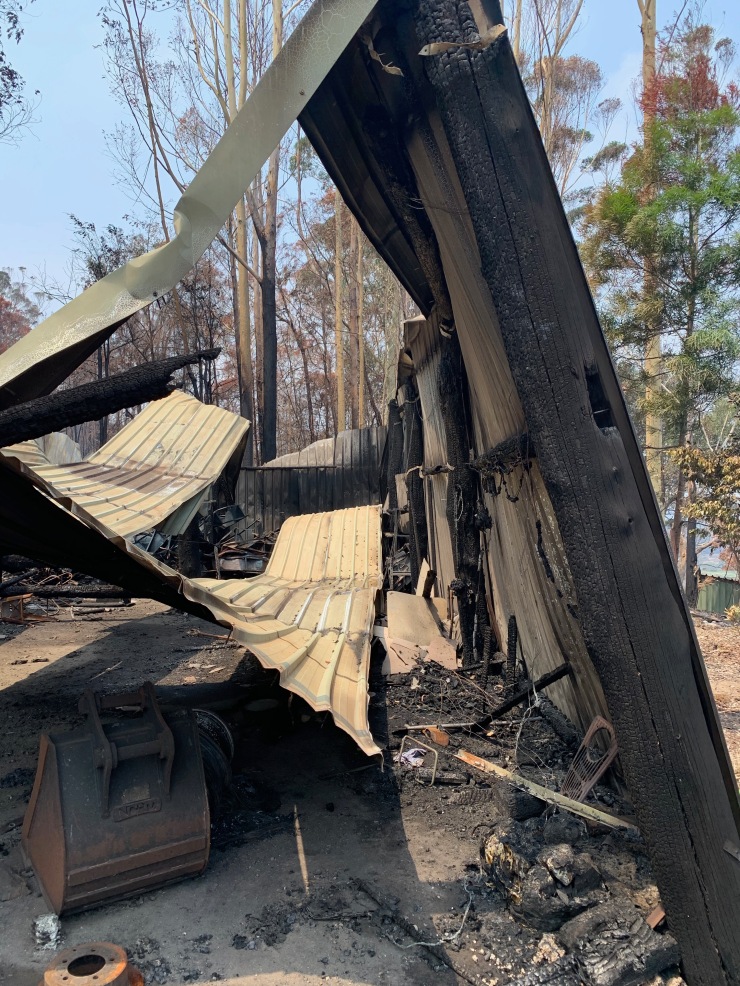 Mindy the donkey, who survived all three fire threats, decided to go walkabout with our neighbour’s cattle a few days later, with no fencing surviving to deter them. The devastation on our neighbour’s farms was heart-wrenching. We passed destroyed houses, dead stock and native birds. Mindy is now safe at a neighbour’s farm, keeping a badly burnt pony company. She’s a special part of the Smith family – Mindy is nearly 20 years old, and generally roams freely across our 100-acre property; she probably knows it better than we do. She’s one seriously smart, capable animal. There’s an ancient creek bed that runs through the middle of the farm that is always somewhat damp; she clearly used it to navigate the property, moving backwards and forwards to areas that hadn’t burnt and where the fire had already passed. She also took advantage of the lack of fencing to help herself to the remnants of my sister’s vegetable garden. My sister decided that in this instance, she’d allow it.

This was the worst bushfire disaster I’ve ever experienced. We need to collectively acknowledge that climate change is shaping our future, our country. We need government action, though we’re unlikely to get it. The past six weeks have demonstrated that it is grassroots, community-based initiatives that will help us create a viable future. They are able to respond rapidly, adaptively, and provide assistance where it’s needed most. We need vegetable gardens, water tanks, solar panels. We need to be more self-sufficient in order to achieve a modicum of resilience that will see us through this summer and the summers beyond. We can do this – it starts at an individual level, a household level, a community level. We have to step up – no one else is going to do it for us.

– As experienced by Marita Smith and Clare Burke Moore xx